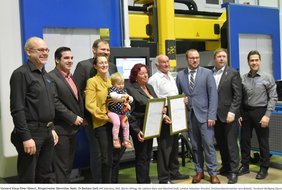 From a forge to a global company

Geiss AG is the largest craft company in the Coburg region. The former directors Manfred and Klara Geiß have now been honored for their lifetime achievement.

Seßlach - Anyone driving through rural Seßlach will have no idea: On the edge of the historic old town, Geiss AG is a world market leader in the industrial area. Around a hundred machines are produced and developed here each year using the latest technology, mostly thermoforming machines, but also CNC-controlled milling machines and cutting systems for post-processing. Bubble soles for sports shoes, hard-shell cases, ski boxes and the backs of aircraft seats, for example, have the market leaders produce on Geiss machines.

At the end of September, the two board members Manfred Geiß and his wife Klara left the company after 47 and 58 years, respectively. The couple was honored on Wednesday for their lifetime achievement. District master craftsman Jens Beland presented two honorary certificates in gold. Despite annual sales of over 32 million euros and 160 employees, Geiss AG is still a handicraft business, and the largest in Coburg, Beland emphasized. Anyone who talks about the economic region should not only have “big champions” on their screens, but also “hidden champions” like Geiss, he added.

"I would take my hat off if I had one," said Mayor Maximilian Neeb of his "insane respect" for the life's work of the honored. He thanked the outgoing for their commitment both for their company and their employees as well as for the city of Seßlach, as a business taxpayer and sponsor and as a socially committed person. In the development "from a hand-drawn wagon to a global company", Manfred and Klara would never have lifted off or forgotten their roots, MdL Martin Mittag praised, "that is not a matter of course". In an exemplary manner, the entrepreneurs cared for their employees, offered secure jobs and supported their families, both emphasized. The company attaches great importance to attracting young people: 21 precision mechanics, electronics engineers and mechatronics engineers are currently being trained for the highly specialized in-house activities. District Administrator Sebastian Straubel was "deeply impressed" and paid the "dream team" of technical manager and commercial manager his "deeply felt respect". The combination of innovative company and owner-managed family business is exemplary. In the "modern industrial district", the Geiß couple have "a very decisive part".

The foundations for the success of the company were laid as a "triumvirate" together with Manfred Geiß 'father and role model Georg. The master carpenter founded the company on December 1, 1948. The “inventor” recognized the potential of plastic at an early stage and presented his new thermoforming machines at trade fairs. "We were a fantastic team," the son summed up the 18 years together on Tuesday. Because of the Bundeswehr and mechanical engineering studies, Manfred Geiß only joined the company eleven years after his wife.

The responsibility at Geiss is now in the hands of Klaus-Peter Welsch and Wolfgang Daum. The IT specialist Welsch was already represented on the board of the company of his parents-in-law. Daum, a trained industrial mechanic and mechanical engineer, has been with Geiss for 37 years. Together, the new board members have been with the company for 54 years. All laudators wished them both a happy hand in continuing the success story, in the spirit of the Geiß family of entrepreneurs.

During the subsequent tour, business sponsor Martin Schmitz wanted to know how Geiss was able to conquer the world from Seßlach. He keeps hearing from the employees how proud they are of “their” company, he added. The secret lies in the individual configuration of each machine, Daum answered. If a representative only wanted to know the price for a certain machine size, it would be difficult. The customer must learn to appreciate the advantage of the solution tailored to him alone. One advantage: "Our machines ensure that the companies produce as little scrap as possible," said the new board member, "because we can specify every machine so that it fits the customer exactly". Manfred Geiß did not hide the fact that they built the most expensive machines. Nevertheless: "Customers love our quality." The 73-year-old is satisfied when he hears: "These products can only have been manufactured on Geiss machines."

A software program for individual milling, welding, lasering and turning enables the unique pieces to be produced so precisely. True to the motto "One step ahead", the company is always looking for the latest production technology. "We always have the most modern manufacturing unit,

"We worked our way through, not worked up."