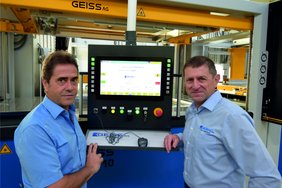 Setting the course for the future of GEISS AG

For almost 3 generations now, GEISS AG, with its headquarters in Seßlach, has reliably accompanied its customers with the necessary knowledge as well as with forward-looking innovations.
2023 marks the 75th anniversary of the founding of the machine and mould manufacturer and represents its many years of high quality among the producers of thermoforming systems, CNC milling machines and tools.
In the course of a succession plan, the supervisory board of GEISS AG has appointed Wolfgang Daum as the new chairman of the executive board with effect from 1 April 2022, who had held the position of one of the two executive board members until that time. Klaus-Peter Welsch, who also served as a member of the Executive Board, has left GEISS AG.
The deputy chairman of the board is now Mathias Ruppert, who, like Wolfgang Daum, comes from within the company and has risen to this management position.
Chairman of the Supervisory Board Manfred Geiß, who with his many years of experience and great personal commitment has continuously developed the company and made it a promising world market leader, wishes both board members every success in their responsible positions and innovative ideas for future developments,
always in accordance with the motto of GEISS AG ...one step ahead!